Last week I boldly teased that I would probably be finished my current painting project.

Well, that did not happen. It’s not because I did something to break it, or got hung up on finishing touches. It was simply a case of me not doing anything with it. As is often the situation with me I got distracted.

What I did do was spend most of the week drawing — some good, some not so good. A bad drawing session was the distraction. It sent me down a path that I have been avoiding for a long time; digitally enhancing a drawing.

During the past month or two I have been producing ink renders with digital enhancements in mind. What this means for me is creating ink drawings with high contrast values, strong contours and minimal backgrounds.

At first, I thought importing into Procreate on the iPad would be the way to go. I tried it a few times but never really liked how it felt. I never seemed to create the perfect drawing to attempt this task (or was too lazy, or a coward).

For me, the iPad is probably best suited for drawing from scratch rather than attempting to spruce up a scanned image.

However, something unexpected happened this week.

I was working on a drawing where I was totally caught up rendering the foreground area and neglected the negative space. After working on this piece for a few hours I gave up. The drawing was tossed aside with great disgust and slated for the trash can.

Instead, I set it aside and a few days later I realized it was a perfect candidate for a digital enhancement experiment. The drawing had all the correct elements: high contrast, clearly defined contours and no background.

So I scanned it and imported it into Pixelmator Pro on my Mac Mini.

My goal was to see how quickly and simply I could make the ink render more interesting. I decided to rely mostly on layering and blending techniques. I used the mouse with various brush tools to do some simple darkening, lightening, blending etc.. By the way, painting/drawing with a mouse is like painting with a brick.

Yes, I could use the Apple Pencil on my iPad, but I just can’t “get into it”, maybe in the future. In the past I relied mostly on Photoshop for photo enhancements. Photoshop no longer fits my workflow (excessively overpriced) but that may change if digital enhancement becomes something I gravitate towards.

Below are the layers and techniques I used. 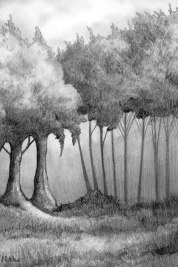 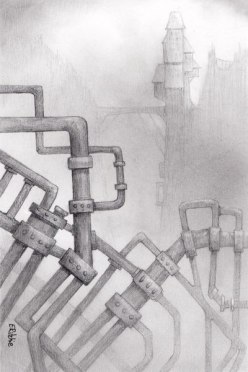 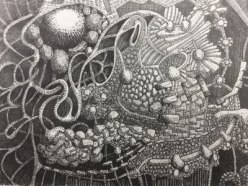