Sometimes you just need to stand back, look around and chill.
Just when you think all is swell — “bam” — head first into a brick wall!

OK, this is not the first time, nor the last time I hit a wall. It happens all the time. Insanity!

Anyway, my painting is still a monkey project, still dabbing, pouring, tilting and messing about. No problems here.

Dang it! All was moving along just great. I was totally relaxed, the drawings were pouring out of me. And then it happened, I drew something that sucked, then another.

Crap, a down cycle!

What could it be, is it anxiety watching our neighbours to the south, or the craziness of the “pandemic” or the rainy weather? Nope, it’s just part of my creative cycle. Sometimes I burnout or do stupid stuff. Simply put: “stinkin thinkin”.

Just like an athlete who has good games and bad games, the same is true for me as an artist. If I was an athlete (hockey for example) I would probably be a grinder. I would be consistent from game to game. Every now and then I would have a great game and maybe get one or two goals.

Then the following game I might score on our own net (by accident of course, but mostly stupidity). I would be benched and sent to the bleachers. Eventually after some self-reflection I would earn my way back onto the ice.

So that is where I am now, in the bleachers watching the game below. I’ll use this opportunity to pause from my art.

Check out the progress of my current painting project. Yep, I pretty much killed it, but I’ll resurrect it after I’ve had some time to reflect.

I poured paint into white, added yellow and blue, swirled it around. Looked cool (for awhile).

As the shape dried and spread it slowly became nothing. That’s not true, I scrubbed it away and painted over it. The shape would have just become a blob of nothingness.

As usual, for email subscribers the header image from this post: 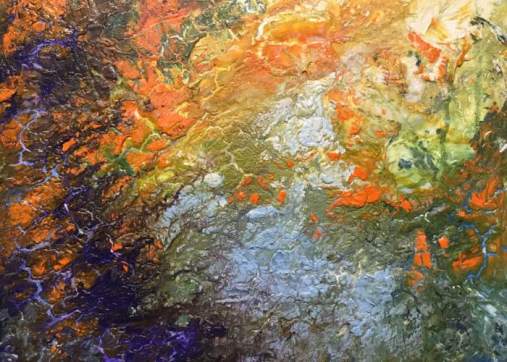 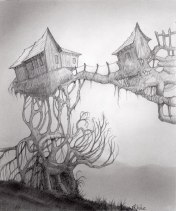