I’m just a monkey doing monkey work. My latest painting project is at what I like to call “the monkey stage”.

I don’t really know where I’m going or what I’m doing. Like a monkey I just keep adding paint to the canvas with no regard to its outcome. It’s possible monkeys might argue that point.

This past week was “monkey week”. I added paint, I swirled it around, dribbled it, poured it and just simply monkeyed around.

The monkey approach works for a while but at some point I have to turn off my monkey brain and “gulp” make some intelligent decisions. I guess if I really want a monkey painting I should just get a monkey.

Fortunately, this is only week three so no need to despair — yet. I’ll save the despair and self-loathing for later. That’s when I’ll start telling myself “…the next one will be better …”

That’s about all this monkey has to say about my latest painting project.

Have a look at some closeups and also some smaller (10 in. X 10 in.) test works I monkey with at the same time.

As usual, if you receive this post via email I have included the header image below. 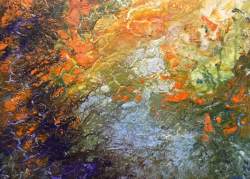 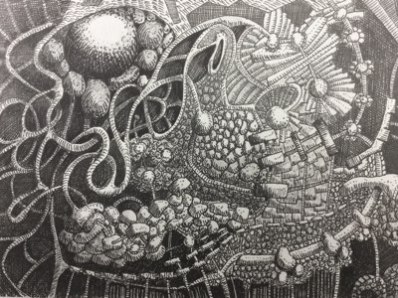