I was convinced last week that by now I would be finished my latest painting project. I made a few “tweaks”!

Um, those “tweaks” ended up being over 10 hours of additional painting. The painting is no longer “almost done”. Those “tweaks” became more than small touches or minor refinements — dang!

I decided to add rock formations to the bottom right corner. After about 4 or 5 tries I finally settled on an approach. This led to the rocks growing in visual importance. Rocks (or stone structures) are my current obsession so the entire painting could become visually buried in rocks. They are piling up — they may even turn into remnants of a structure.

The image is becoming more than just a landscape painting. It seems to be migrating towards something more like a post apocalyptic dystopian view of the future. Hopefully next week and if I don’t make anymore “tweaks” I will explain — ya know, BS.

As usual I have included a few of my drawings from this week.

Bonus – for email followers that don’t see the header image:

I hope the above verbal dribble is coherent. I’m anxious to get back to “tweaking”. 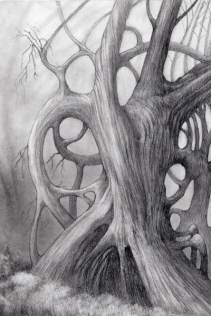